“What really is love? What lies at its core?”. Simal Malhotra quizzes the readers at the end of her second book “Tides Don’t Cross” and she herself provides us the answer along the end of an engrossing tale.

Simar Malhotra’s second novel “Tides Don’t Cross” has a minimal yet striking illustration with a melange of colors which would grab the reader’s eyeballs for its resplendent cover. Sourish Mitra’s thoughtful inclusion of the three main characters along with the Eiffel Tower needs to be lauded bringing the author’s vision to the eyes of the reader through the variegated cover. The title of the book “Tides Don’t Cross” which makes the reader inquisitive about the tale they are about to encounter has its inspiration from the words “People in true love are like tides – they never cross each other, they dissolve into each other”  of the book.

The book is divided into three parts and has its focus on three prime characters. The first part introduces us to Neelam Siritya, an obdurate, control freak mother who wants nothing but the best for her children. She single-handedly raised her two children, Mrinalini and Rukmani after her husband passed away. Mrinalini, a meek but stoic with traces of subservience is locked into a loveless marriage life with Surya. The second part takes place in the picturesque city of love “Paris” where Rukmani aka Rhea, studying in NYC arrives to study a semester in France and falls in love with Ayaan Khan. He is a passionate swimmer who aspires to claim a spot in the Olympics team for India and struggles hard to match the performances of the recruits at Standford where he studies. The final part which happens after three years of Rhea and Ayaan’s break up culminates in the intersection of the three characters at Delhi and what happens next forms the finale of this riveting tale.

The characters are neatly etched and remain relatable throughout the book which makes it easy to get under the skin of each character growing mentally and emotionally with these characters. The plot which is neatly divided into three parts tends to be cliched for the most part, stands apart with the author’s lucid writing which takes the story seamlessly through the 250 odd pages. The way Simar introduces each character weaving them into the tale making the reader get engrossed into the setting of the book with her fresh yet simple words is brilliant and makes us turn the pages, although couldn’t shrug off some predictable parts which weren’t taking much of our attention.

I particularly cherished reading and could relate to Mrinalini and the way she evolved from a subservient daughter to an independent mother confident of taking care of her only son without anyone’s advice or help to clear the thoughts that had been plaguing her mind. The turn of events at the finale was unexpected and was the coup de maître of Simar Malhotra’s earnest and profound writing. The characters would remain in the crevices of the mind of readers even after closing the book taking with them the things the characters learned all through the way.

The book is a fresh, piercing read and would recommend this to readers who search for new voices and to readers who want a fresh read for a breezy evening.

“It’s especially painful when the past is happy, you know. Because you had a taste of what could be but isn’t anymore.”

“I like to think we’re quite like plants – some like ferns, shooting up instantaneously with a little bit of sunshine and rain, others like bamboos, taking not months but years to sprout. That doesn’t make the bamboo a bad plant, it just… works differently.”

“A lot of times when you get hurt and don’t realize it, you don’t feel its pain. But when you do see it, all the unrealized pain also cumulates and towers above you.”

“One’s faith is not a definer of who he is.” 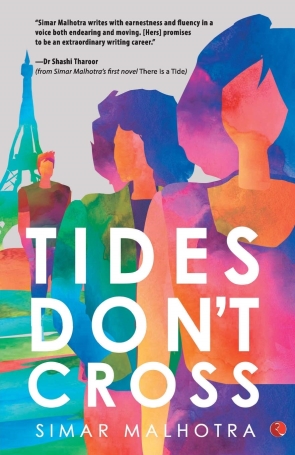 Find about the book here.